RU
The observer
12.02.2021 - 28.03.2021
The exhibition is woven like an oriental carpet from the artist's reflections on the intercultural communication theme. 17 bronze works, created from 2018 to 2020, and artist’s photographic archive - reflecting on personal experience on the topic of what is a weapon. Aidyn Zeinalov evolves an idea of tragic in everyday life, focuses attention on the psychophysical pathologies of military conflicts, not sharing their cause, time, geography.

The world has been on the fine line between war and peace during its existence. Differences of religions, cultural and communication codes, problems of interfaith and interethnic contradictions, geopolitical interests provoke bloody conflicts. Lack of water, food, medicine, refugee camps - Earth's sickly body. “Man is an aggressive creature who tries to resolve any dispute by force,” says the sculptor Aidyn Zeinalov. "But when a child is born, and there is hope for a safe life, a child's world with innocent toys".

The exhibition is woven like an oriental carpet from the artist's reflections on the intercultural communication theme. 17 bronze works, created from 2018 to 2020, and artist’s photographic archive - reflecting on personal experience on the topic of what is a weapon. Aidyn evolves an idea of tragic in everyday life, focuses attention on the psychophysical pathologies of military conflicts, not sharing their cause, time, geography.

As a son of an Arab diplomat, Aidyn traveled around the Middle East from his childhood, got acquainted with the history and traditions of Arab countries. Syria, Egypt, Iraq, Iran, Yemen, Saudi Arabia, Lebanon, Libya, Tunisia, Morocco, United Arab Emirates, Jordan in children's vivid memories turned into a colorful bazaar with multicolored scarves, ancient artifacts, juicy fruits on antique trays and counters with battle grenades. “Thirteen-sixteen years old teenagers with Kalashnikovs in their hands could drive up in an old jeep to the market in the medina and buy some vegetables,” recalls Aidyn. “You're always at the gunpoint, but that doesn't scare anyone there. Peace and war got united". For a European man, weapons are something dangerous, causing injury and death, but in most Arab countries, life is in direct contact with war and all its attributes. Yemeni boys wear a dagger "jambiya" with a curved blade on their belt as a symbol of early adulthood. Edged weapons are a favorite toy. Child-soldiers are always ready for battle.

The material in concept of Aidyn Zeinalov's works is important, the artistic thinking is a curtsey to the unfinished works of Michelangelo, sculptures of the Rodin’s and Medardo Rosso’s era. Taking a serious approach to the dialogue with the classics Aidyn often gets into surreal games with it.

The monumental sculptures "Torso " and" Warrior " demonstrate Zeinalov's skill in reproducing forms of the human body and military attributes. The naked bronze athlete-defenders represent an existential calm. Carefully working through the collection of daggers, spears and shields, Aidyn focuses on the historical and cultural tradition of the production of weapons as a constant companion of human evolution.

The puppet Deities are inspired by childhood experiences. Aidyn lived with his parents in Egypt from 1986 to 1991. A Soviet child, Aidyn, learned at once about the existence of the ancient Egyptian pantheon of gods, pyramids of the pharaohs, sphinxes, as well as "Pepsi", "Fanta", colored cars, clockwork birds, and Barbie dolls. The image of a "Doll-God" is one of the extremes of the modern society that idealizes physical perfection.

Aidyn Zeinalov’s carpets are created to be seriously examined. Impressive volumes of bronze are made with meticulously observed realism. Floating baroque forms hypnotize – sometimes impended, then falling as a solidified lava.

The gallery space simultaneously becomes a venue, an art medium and an agent. The visitor is invited to take a transcendental journey: To pass through the ruins of a mythical Arab city with sand under their feet, strong odor of fragrances and see the disguised reality of Aidyn Zeinalov.

Born in 1978 in Moscow, he received his professional education at the Moscow State academic art Institute named after V.I. Surikov under the direction of the famous sculptor Alexander Rukavishnikov. 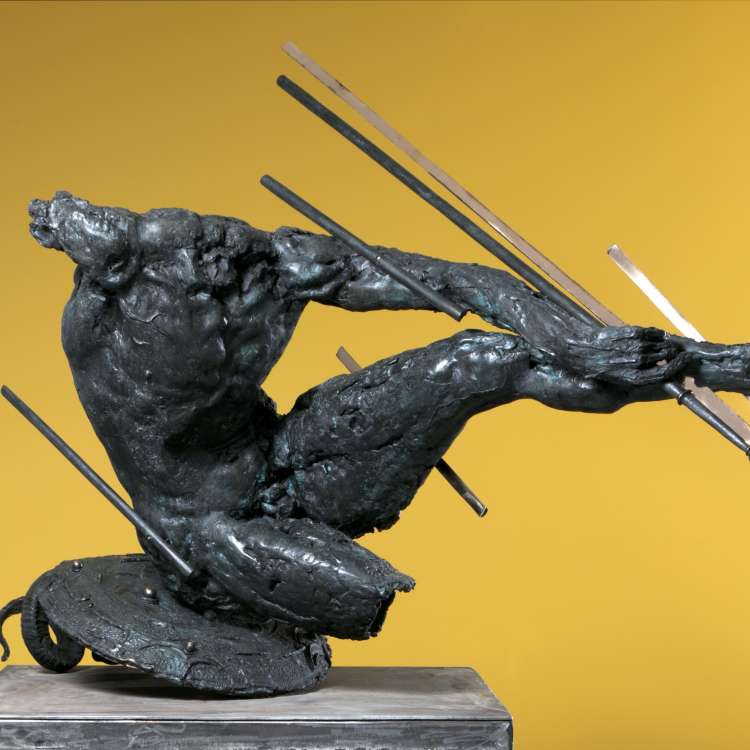 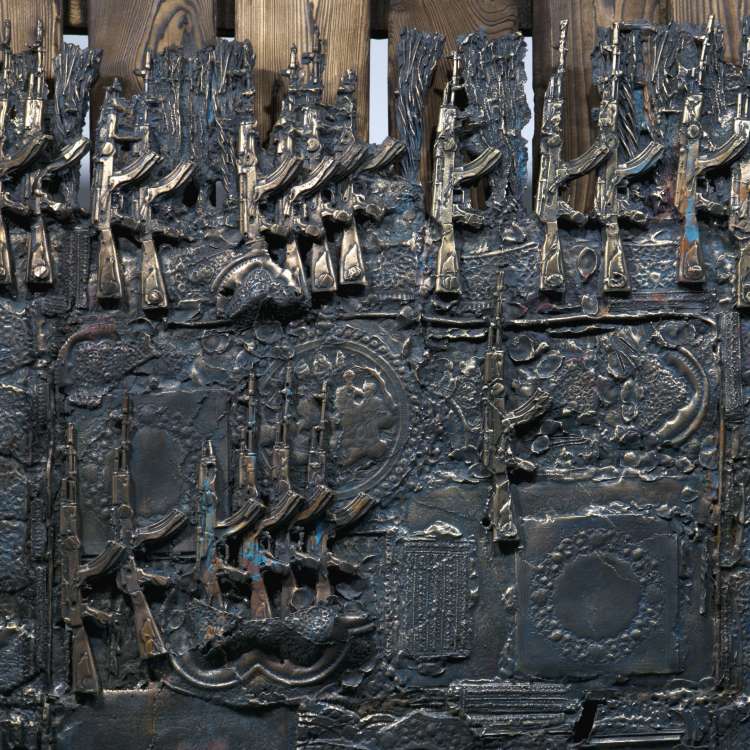