From July 10th to August 30th, Ruarts Gallery will host the exhibition "Wasted" (curated by Alex Partola) that is the first project within a gallery by the Moscow artist Zoom, whose works have regularly appeared on the streets of the capital over the past few years, attracting passers-by because of their burning subjects and radical forms.

Having conceived the project in 2019, Zoom presented it as a reflection on a possible dystopian future – a kind of warning to humanity about the terrible consequences of the current irresponsible use of natural resources and the endless overproduction. However, today we are witnessing directly what seemed to be the worst-case scenario.

The post-apocalyptic picture of the world turned out to be a reality, the present state that we met face to face. As the curator of the exhibition Alex Partola notes: "Alarming announcements ("Attention, quarantine!", "Pure water", "Beware of looters") on the iron fence from the Zoom’s work "Are you ready for the future?" made in late 2019 no longer look like abstract notifications from the distant future, and the very question from the title no longer needs to be asked".

What does the artist think the current situation consist of? In the works prepared for the exhibition "Wasted", Zoom demonstrates how the endless consumption of goods today is intertwined with the absorption of a continuous flow of information that overwhelms the audience, cramping to absorb as much media content as possible ("Infopeckings" and "Sea of media"). The modern person appears simultaneously buried both under material garbage and under informational trash.

Of course, there have always been wars, diseases and economic problems in human history, but only our generation has experienced them all at once, in a highly concentrated form. This time, the crisis has affected all spheres of our life, and we are unable to cope with it unless we change our old patterns of behaviour.

People recklessly deal with the resources of the planet, considering that when the Earth wears out, it could be easily thrown away and replaced by another one. But now we observe that the planet is going to "return the favor" and to throw the human away into a waste bin. The rapid spread of the COVID-19 virus has become a direct threat to our lives and health. Acting as a litmus test, the pandemic clearly demonstrated the global nature of what was happening: all the existing problems, including economic, environmental, political and social ones, came to the surface and humanity suddenly found its ultimate vulnerability.

Just recently it looked like if we would soon plunge into a virtual reality and find there a safe paradise, but now, after mass isolation it became clear how attached we are to the physical world, which is about to collapse right before our very eyes.

Despite all the technical progress, we remain medieval blind men in our VR glasses, who do not notice that their leading figure has already fallen ("The Parable of the Blind").

But while in the Middle Ages people had at least hope for a god who would come and organize their salvation, today he turned his back on us and hung a sign on the door "Do not disturb" ("Knockin' On Heaven's Door"). Now that reliance on a higher power has become meaningless, all we have to do is finally stop in our carefree existence and take the matter into our own hands. In a situation where all the connections between man and nature, citizen and state have been broken, and the old methods have shown their inconsistency, we must reconsider our behavioral patterns and introduce some radically new individual and social practices.

Radical pessimism of the artist Zoom is combined in his practice with direct address to the viewer through popular media images and the use of rough techniques. Zoom's works for this exhibition are made of extremely "non-artistic" materials: plastic bottles, rusty metal barrels and containers, magazine cuttings and cable wires. All this is aimed to produce the most effective punch to the mass consciousness – according to the artist, today it is the only way to make people come round.

As the curator Alex Partola puts it: "The exhibition "Wasted" invites us to look around again at our world, our modern way of life, social relationships, distances, values and above all at ourselves. We are witnessing the total uncertainty and fragility of the global system and its coordinates. Today it is more relevant than ever to reconsider deep-rooted values and to define the things that are really important".

Zoom is a pseudonym of an anonymous Moscow street artist known for his active stencil bombing (illegal practice). The artist uses various materials as tools for his projects depending on the task: stencils, posters, masking tape, aerosol cans. Either a wall or a covering banner on the fence can serve as a background for his works. Zoom prioritizes to work with the urban texture, the “dirty beauty” of the metropolis. A characteristic component of Zoom plots is irony or satire. The artist uses images from the legacy of the Soviet era and Hollywood, as well as from the modern media, and sometimes he makes comments of current political events. Among the official works, Zoom participated in the #project64: NO/DEPENDENCE of Artmossphere II Biennale of Street Art in the Optics pavilion at VDNH (2016), in the exhibition Enter History at the Moscow Museum and in the project Wall Elements in the Manege Central Exhibition Hall (St. Petersburg) in 2018.

We express our gratitude to the company "Sphere of ecology" for assistance in creating a number of works.
MORELESS SHARE
Exhibition Press
EXHIBITION
Press 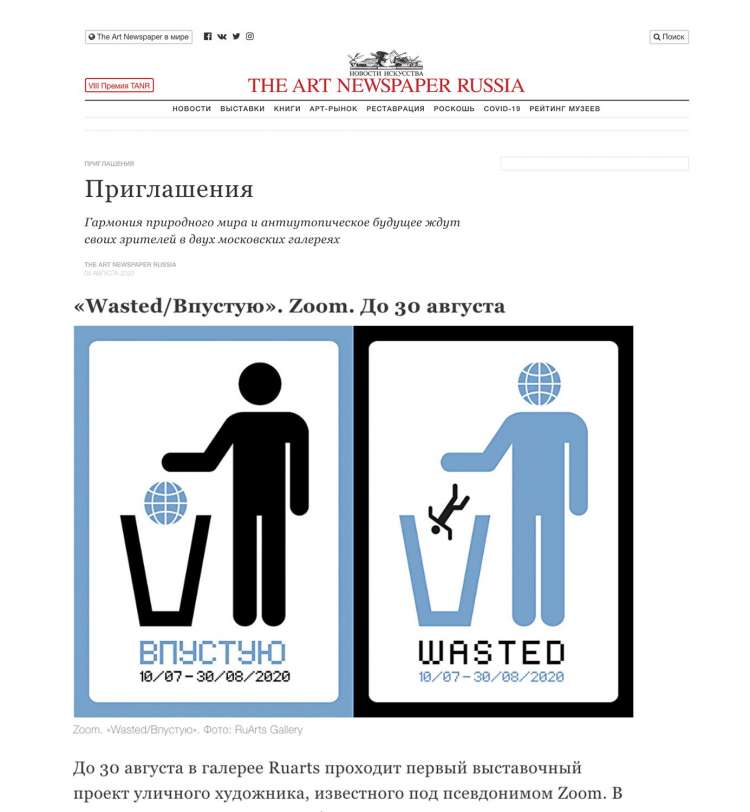 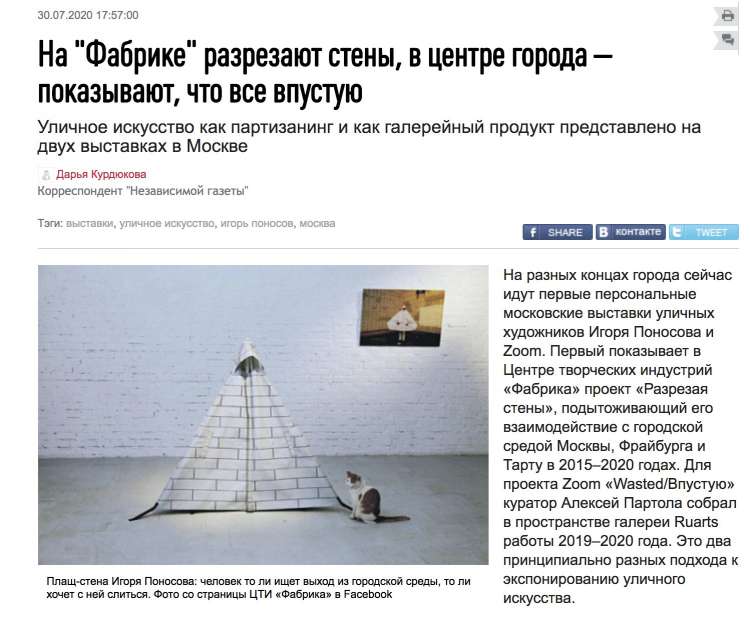 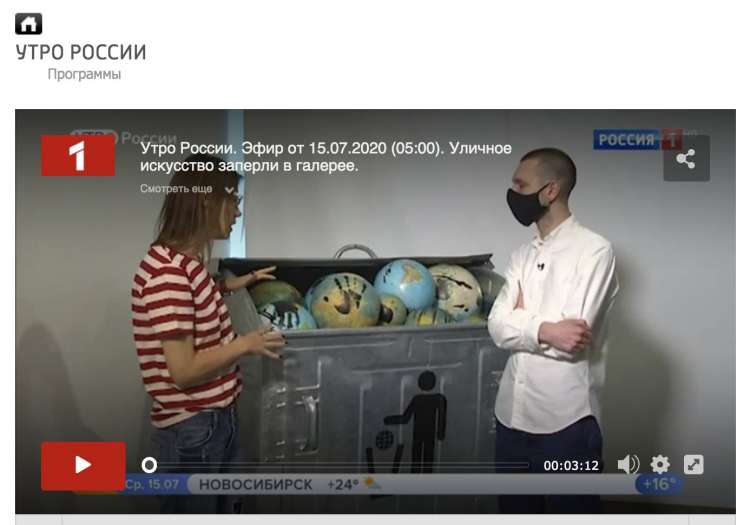 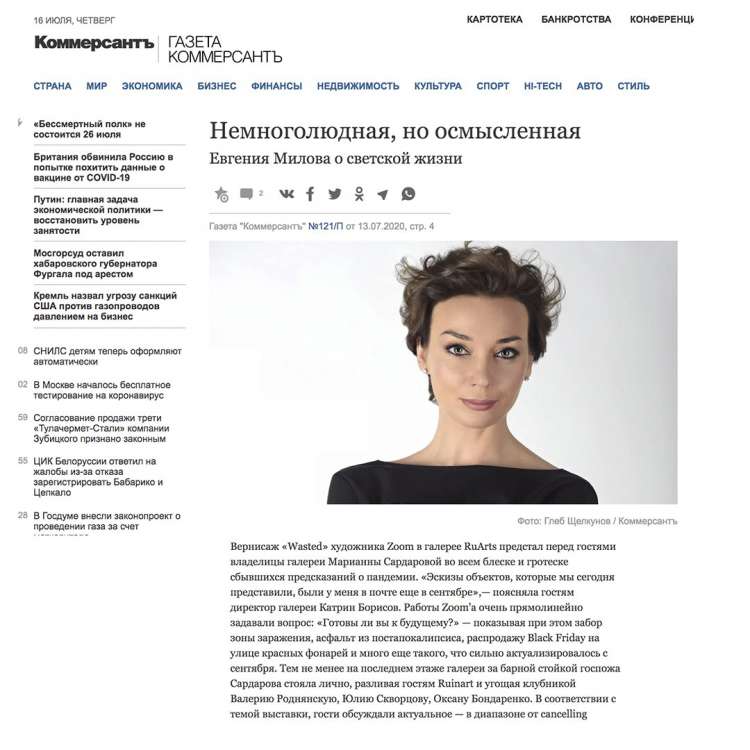 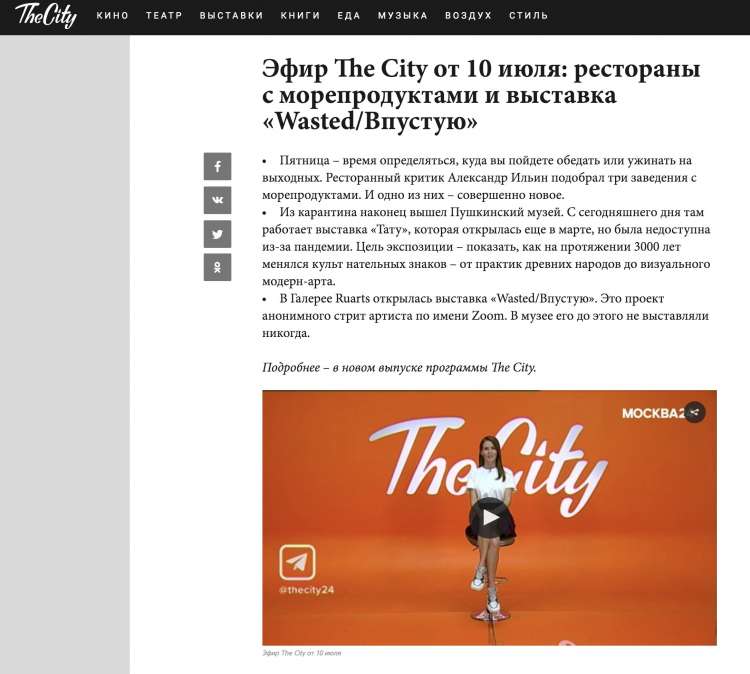 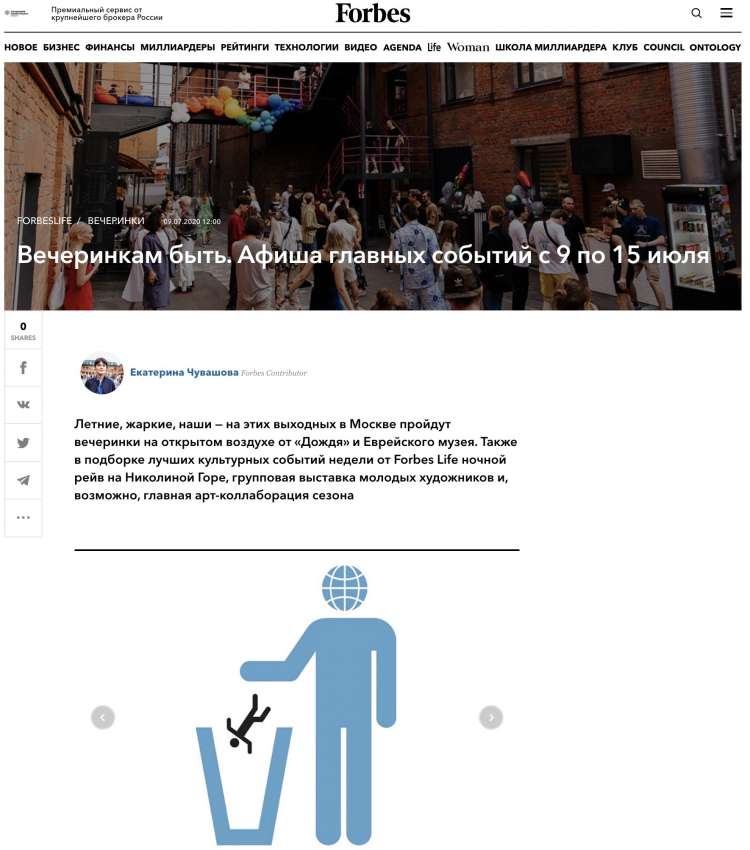