"It all started in the mid 70s of the last century, when I became an on-site photographer. I was taking photographs of children in schools and kindergartens. Then I started to work at advertising. In 1977 I have joined the photograph class on the famous “Malaya Gruzinka”, fashionable place that has been specifically created for artists, heroes of The Bulldozer Exhibition, which was so brutally dispersed by the communist authorities. I just wanted a line in an employment history, but close proximity to the artists had its impact, and I began to take portraits of nonconformist artists. There were women among them. Two of them. I add their portraits to the exhibition "Portraits of Artists", but “hudsovet” (synonymous with the word "censorship") made me take them out. One of them, because there was the artist on it, who was painted in the style of "body-painting" - nude in their comprehension, and the other for the fact that there was too much to be seen thought the dress. The second artist was tough and by hook or by crook she made them rehabilitate her portrait. There were a lot of beautiful girls, among variety of entertainers. Their common problem was the absence of good dresses. Or rather the lack of all that was not shameful to be shooted in. Therefore, the actresses were starred in concert dresses and artists were nude or draped. What they were shooting for then? When I was asked, I answered: "For humanity." Probably that sounded convincing so that negotiations were coming to an end by that. And then came Perestroika.

"Underground Heroes of the '80s are kids that are having fun. They don’t want anything else than fame and candies. Borisov is not a flatterer for them, flattery is dissolving in a thick narcissism, but he is not a critic as well. Their sparkling narcissism is tempered by the lack of spectators. They are doing it for the audience, which is abscent, that’s why this game is invulnerable and total. As far as it imitates the culture that is expiring, the photographer must be its straight witness, a new carelessness that is born in the creative merge of the photographer and model. There is no falseness in here. Real and fake are losing its former antithesis, because today is their time, but will it remain the same tomorrow? There may be no tomorrow. That's why the word model, losing its technical seriousness started to mean the owners of long legs and fluffy eyelashes. Mannequin is a new symbol of eternity. Only the outer covers of her body, which would have been a pile of trash without her are changing. But when tender breasts are drawing attention from underneath, everything becomes golden and miraculous". A. Rappaport, The Ogoniok magazine, 1993.

In the late 80s and early 90s my studio became surrounded by Western journalists. I had an impression that they took my photographs more than from TASS. Queues of Western journalists literally were standing to reach me. They were all interested in the nonconformist youth subculture, among which I was hanging out, and in the young fashion, which was very interesting for me as well.
That was a surprise for me that such an advanced magazine as Hamburg TEMPO placed a photograph taken by me in 1985, which I thought belonged "in my desk" on the cover in 1987. In 1989 Parisian PHOTO at the last moment withdrew my work "USSR" from the cover, where the girl, wrapped in the flag of the USSR, held a sickle under her throat. The editorial office of PHOTO was asked not to irritate Gorbachev who was arriving to Paris just at this time. But on the other hand this picture appeared on the cover of "Stolitsa" magazine in 1991, just in time of August Coup. And it was exactly the mid 90s when my works were getting interest in major international galleries and auctions worldwide.

"The fate of Russian photographers of the 20th century evolved in very different ways. Masterpieces of the 20s became the cultural heritage, and works by Soviet photographers of later periods, which were none the worse, not only remained unknown in the world, but often forgotten even at homeland. Sergei Borisov is lucky. He succeeded on both sides of the border. He achieved the freedom so that can afford to create a new style each new decade of his artistic biography and always remain famous photographer Borisov. The riddle of the Borisov is also the puzzle of any good artist, this is his metamorphosis. He first became famous in the early 80s as a master of photographic portraits of musicians and stars of Soviet music, changing the look of disc covers radically. On the verge of the 80s and 90s, the same, but completely different Borisov distinguished himeself by photodiscovering of the unofficial artists wonderful tribe, sometimes called bohemia. With these pictures he was on covers of the top photographic magazines of the world and made a name for himself". Lisa Plavinskaya, The Arlekino magazine, 1995.

But what about the girls? Something told me that I should not give in to the glamor tsunami that swept the Russian magazines and exhibition halls. Not only my friends and apprentices, but several philosophers and photography theorists I respect supported me on this. And of course RuArts Gallery. During the conversations with them, I came to the conclusion that my workshop Studio 50A is quite self-sufficient, and I would call "girls" all the girls who are visiting it, because they are very international by origin, and I also traveled the world myself a lot, and paid tribute to the beautiful and creative girls everywhere.

"It is believed that in contemporary art there is no and there can be no style, because "programmic direction" here is a mixture of stylistic manners and languages, citationality and accordance to the chosen interpretation context, fear of authorship. In this case, Sergei Borisov is a Happy Exception to this general rule. A free gliding in space of frontier aesthetic categories is distinctive for him. His art is a rare example of a contemporary, but not "recruited" art, it does not serve the "fancy" discourses. He is a Figure, inconvenient for critics and irritating for the colleagues for his non-integration in recognized schemes of contemporary art. And yet the artist, without whom it is impossible to imagine the Moscow photographic scene of the last decades, whether it is a portrait gallery of metropolitan bohemians - famous actors, musicians, nonconformist artists or poster art, scandalous exhibition, shocking the audience". Tatiana Salzirn, 2001.
MORELESS SHARE
Works Выставка Press
Works
EXHIBITION 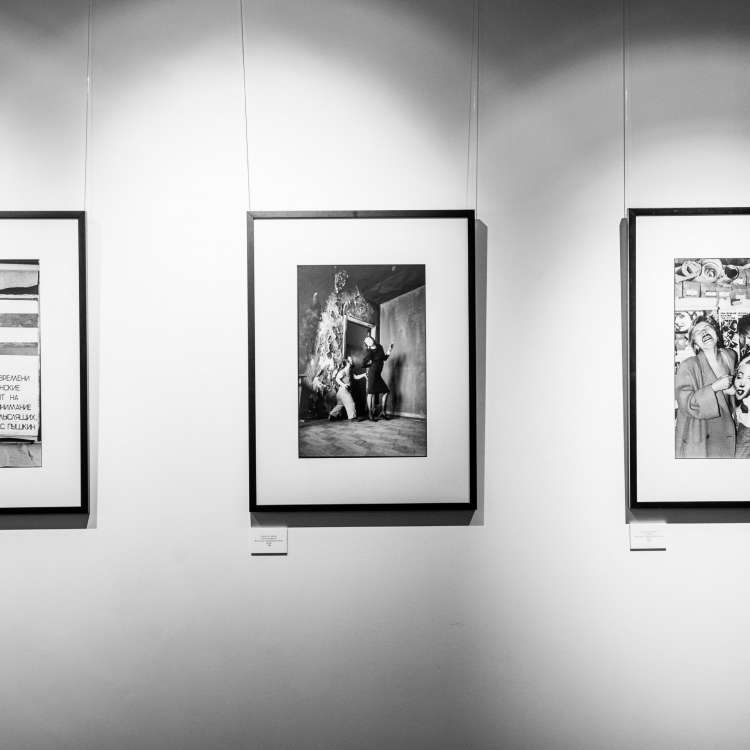 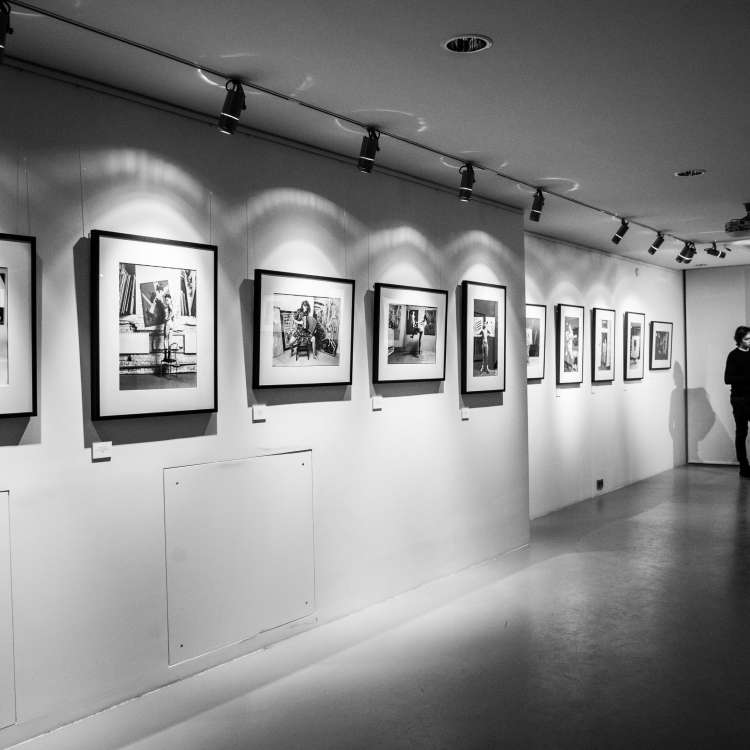 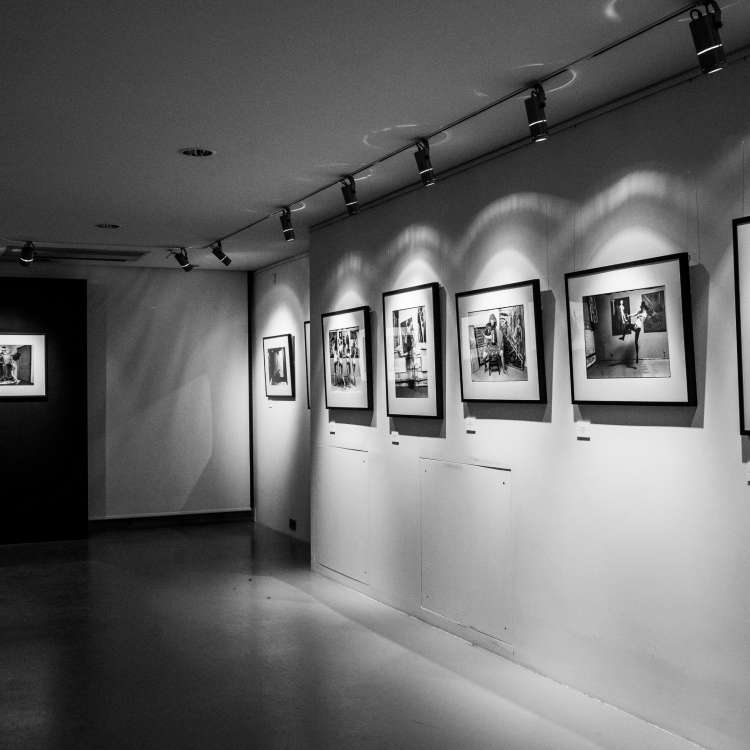 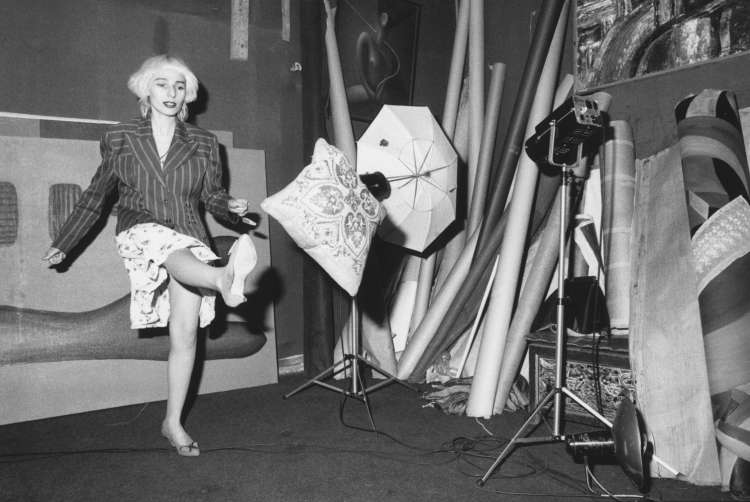 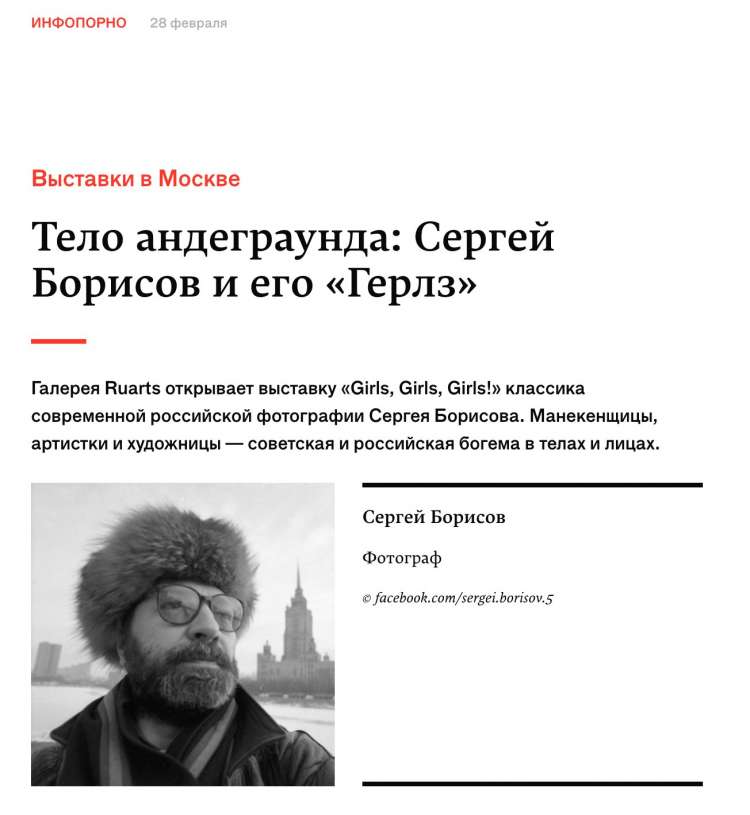 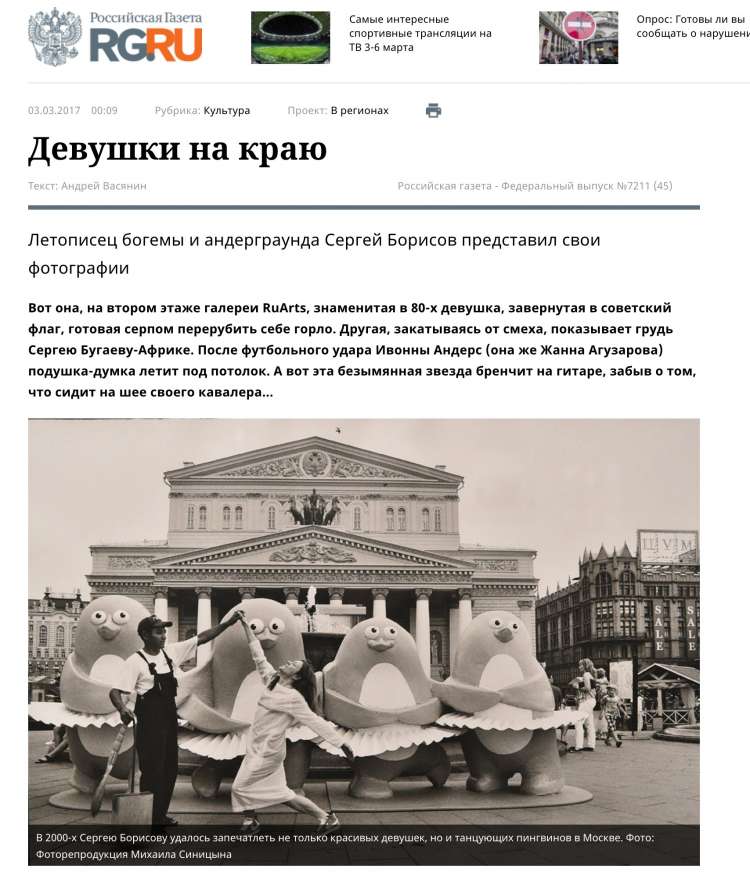 Girls on the edge 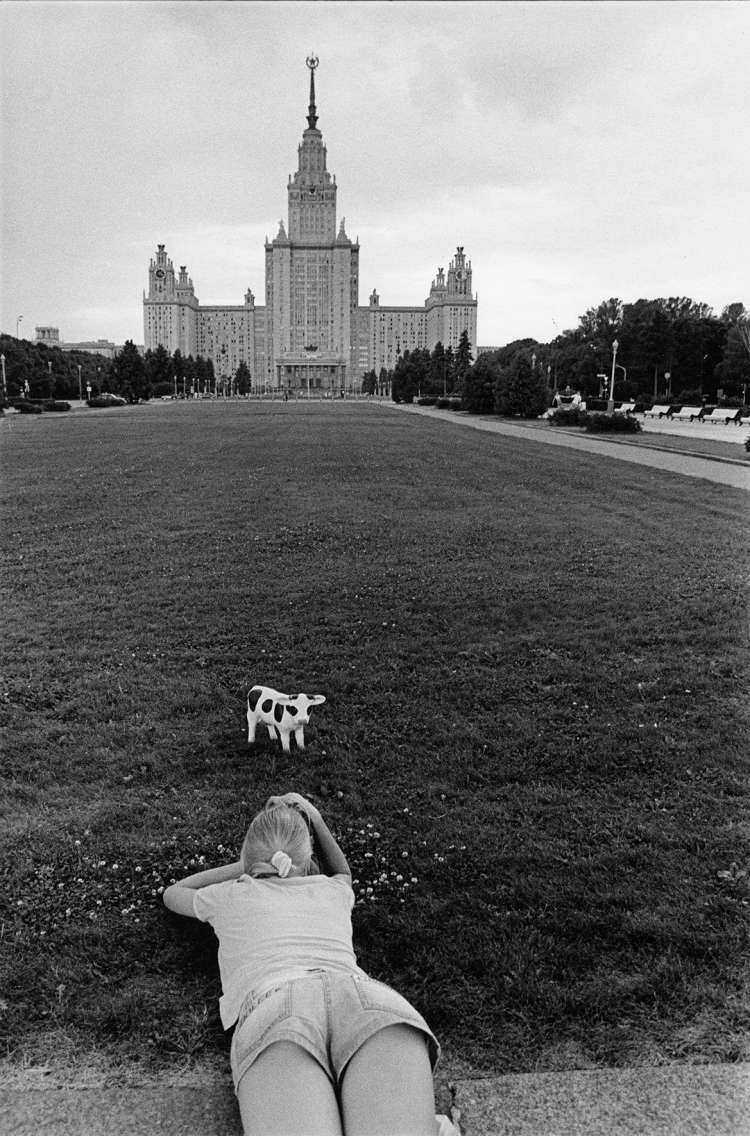 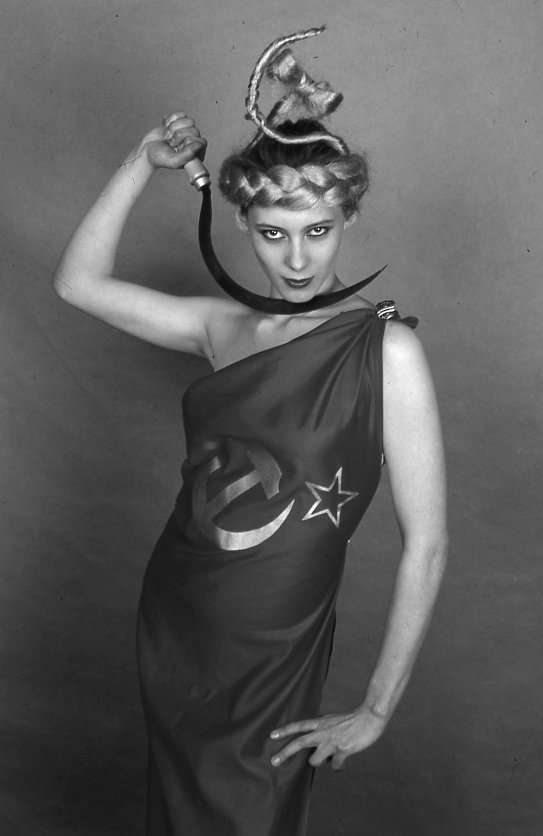